Feb 16, 2021   |   Back to News State Pension Fund Returns Soar Amidst Pandemic PRIT Fund Assets Rose nearly $10 Billion in 2020
Written by Colin A. Young
Published by State House News Service
PDF of the article available HERE.
Following market volatility and uncertainty at play through much of the rst half of 2020, a strong second-half performance for the Massachusetts state pension fund -- the largest six-month return in its 37-year history -- helped drive the fund up to an all-time high of $86.9 billion by the end of 2020.

Pension Reserves Investment Trust (PRIT) Fund saw a return of 16.4 percent from July 1 through Dec. 31, outperforming its benchmark for that period of 12.5 percent. at topped the record for a half-year return of 15.7 percent that had stood since June 1986, ocials said Tuesday.

For the full calendar year 2020 -- a year that saw volatility rock nancial markets as the pandemic rst took hold before they stabilized and some indices set new records -- the PRIT Fund produced a return of 12.1 percent, beating its benchmark of 10.8 percent.

Michael Trotsky, executive director and chief investment ocer of the Massachusetts Pension Reserves Investment Management Board, presented the fund performance report during a meeting of PRIM's Investment Committee on Tuesday morning but reminded committee members that the positive results "mask hardships and uncertainties" that persist in the economy and society.

"The strong market return seems like a cruel irony because it does not capture the hardships that so many in our country are facing. Sometimes, we all know, markets do not seem logical. So let's please review today's results with appropriate humility and let's be gratied that we're doing our important part to grow the assets used to support more than 300,000 beneciaries," Trotsky said. "A strong return, so to speak, is a shot in the arm to pension security for our beneciaries in this time of so much struggle and uncertainty."

Trotsky said he is reminded daily of the economic struggles so many people in Massachusetts and across the country are contending with, often as he walks from the train station to PRIM's oces on State Street.

"Each week, I notice more businesses folding and I notice more and more homeless on the streets as I walk from the train station to the oce. It actually often feels dangerous right in the Financial District, right where our oces are," he said. "And believe me, it does not seem like the Boston of a year ago and it breaks my heart."

The fund's calendar year performance equates to an investment gain of $9.6 billion for the PRIT Fund.

After the PRIT Fund shed 9.9 percent during the rst quarter of 2020 as the COVID-19 pandemic rocked the global economy, Trotsky said in April that PRIM would "continue to have no problem paying pension benets."

The PRIT Fund paid out a net $1.5 billion in benets to retirees during 2020. The retirement funds of state employees, teachers and many municipal employees in Massachusetts are invested through PRIM. "The PRIT Fund continues to perform very well in both up and down markets. Down markets like we had in the March quarter, where we performed admirably, but also in up markets like we had in the September and December quarters," Trotsky said. "In all, it was a very strong calendar year performance and the fund, again, is at a record high of $87 billion despite the extreme volatility and uncertainty we faced during the year, a year that we won't soon forget."

Looking at the markets, Trotsky said it seems to him that they "consistently look through any near-term bad news" like spikes in COVID-19 cases and deaths, logistical problems distributing the vaccine, the emergence of more-contagious coronavirus variants, and a recent deceleration in overall economic growth. "But these near term issues have not been enough to stop a staggeringly strong market, mostly because of a few hopeful new developments. First, the new administration is promoting a new $1.9 trillion stimulus package and that's viewed as good news for the economy, at least in the near term. Second, a new, more centralized and hopefully better coordinated federal response to the virus will help put that hopefully in the rearview mirror. And third, signals that the Federal Reserve will continue to be accommodative under the new [Treasury Secretary] Janet Yellen will all lead to a better economy in the future," he said. "Obviously, there is still a lot of economic, political and public health uncertainty to worry about." 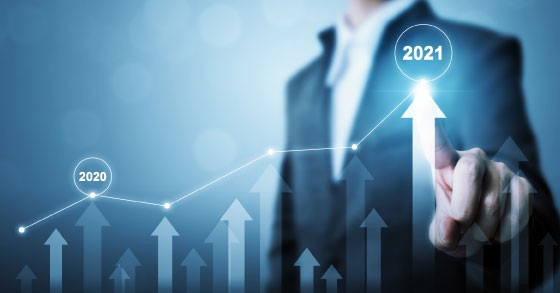