The SEIU International convention was held in Detroit Michigan and concluded on Tuesday May 24, 2016. NAGE National Executive Board members attended the SEIU Convention as delegates and participated in the election of officers to the International.  SEIU members from around the globe traveled to participate in the SEIU Convention for the election of officers, adoption of bylaws and resolutions and to hear the activists and leaders of SEIU talk about the many achievements and campaigns launched and won by SEIU and its members, like the Fight for $15, winning a higher minimum wage for fast food and other low paid workers across the country.  At the conclusion of the Convention, SEIU International President, Mary Kay Henry was reelected and NAGE National President, David Holway was reelected as an International Vice President and Executive Board Member to SEIU.

Presidential candidate Hillary Clinton spoke before the SEIU Convention of several thousand members that included NAGE National Board members and gave a notable speech which we shared on our facebook page. Her speech (link here) focused on the state of America and how organized labor and collective bargaining are good for the middle class. NAGE senior officials are encouraged to begin another year under Mary Kay Henry’s leadership. 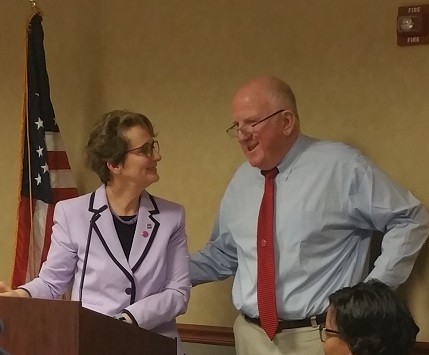