WEBSTER, MA – Webster police officers arrived first on the scene of a house fire on December 29, 2015 and were able to save the life of an elderly woman, pulling her from the burning building.  Officers James Young Sr., Robert Larochelle and Spencer Donovan helped the fire department to safely evacuate all other residents of the multi-family home.

The fire department reports that the initial call came in at 12:42 PM.  The Granite St. building escalated to a three alarm fire and unfortunately, the entire property was lost to fire damage.  Two NAGE officers were treated for smoke inhalation at Hubbard Regional Hospital, and later released.  “We are lucky to have members of the police force who don’t hesitate to act” states IBPO Director Ray McGrath. The cause and origin of the fire are still under investigation. 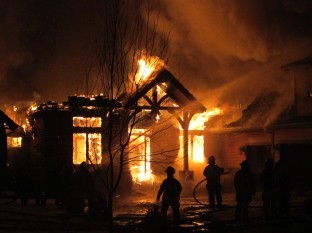