By Laura Crimaldi GLOBE STAFF  FEBRUARY 25, 2016
SALEM — As Philip Chism prepared to go on trial last year for the rape and murder of his Danvers High School math teacher, Judge David Lowy had a question.
Paul Gaeta, a court officer with whom Lowy had worked for many years, was planning to retire in October. But would he stay for Chism’s trial, which promised to be long and full of graphic testimony?
The 71-year-old Gaeta did not hesitate.
“I just decided I was going to do it,” Gaeta said in an interview at Essex Superior Court in Salem. “[Lowy’s] been so damn good to me and if I could help him, I wanted to do it.”
But now that Chism, 17, is set to be sentenced Friday and another murder trial assigned to Lowy nears its end, Gaeta plans to retire early next month, he said.
Lowy said the court is losing an “incredibly conscientious public servant.”
“He just takes his job really seriously,” he said. “The decorum in the courtroom is a really big deal to me, and Paul just has this presence. His entire manner helps me out in trying to set expectations for everybody involved in the case.”
Gaeta said he became a court officer 28 years ago after stints in other fields.
It was on the job that Gaeta met his wife, Michele, who is also a court officer.
On their first date, the couple saw a James Bond movie in downtown Salem. Gaeta wore his uniform, his wife said.
“I was so embarrassed,” she said with a laugh. “I told him, ‘Don’t ever do that again!’ ”
The couple married in 1991, and they have a daughter, Teagan, now 23.
Gaeta’s position took him to courthouses in East Boston, Lowell, Woburn, and Chelsea, and then back to Salem, where he has been assigned to Superior Court since the 1990s.
Gaeta developed a reputation for showing respect to everyone he encountered. Whether you were a lawyer, juror, defendant, victim, clerk, or family member, Gaeta treated you with dignity.
“He’s always been a calming influence,” said Jeffrey Karp, a defense attorney in Newburyport. “When I try a case and Paul is in charge of the courtroom, there’s a lot of things that I don’t need to worry about.”
In 2011, Karp represented Jose Cabrera, who was being tried for fatally shooting a 22-year-old Lynn man in a gang-related dispute.
Before the verdict was announced, Lowy told the audience he expected them to remain composed, no matter the outcome, and police officers guarded the courtroom, Karp said.
The jury found Cabrera guilty of second-degree murder, and pandemonium erupted.
“[Cabrera] literally flipped the table over,” Karp said. “He just went crazy.”
Gaeta was first to reach Cabrera to subdue him. He ended up at the bottom of a pig pile.
“We both went down. Everyone came on top of us,” Gaeta said.
The following day, Gaeta said, his doctor told him that he had cracked one rib and bruised others.
“It wasn’t bad,” he said. “It only hurt when you breathe.”
For a while, Gaeta kept his wife in the dark about his injuries, she said.

“He’s kind of like that,” said Michele Gaeta, chief court officer in Haverhill and Newburyport. “He still worked. He hasn’t taken one sick day in his whole career.”
Essex District Attorney Jonathan Blodgett, whose office prosecuted Chism, was relieved Gaeta stayed for the trial.
“I wasn’t surprised that he agreed to stay on when Judge Lowy asked him because that’s the kind of guy he is,” Blodgett said.
Gaeta’s work is a blend of public duties and behind-the-scenes tasks. He opens and closes the court with the formal declarations that begin with the phrase, “Hear ye, hear ye, hear ye!” and end with “God save the Commonwealth!”
Lowy called the way Gaeta performs the declarations “ineffable” and has highlighted it for jurors. “He means it when he says it,” Lowy said. “He’s not just saying it. He feels it.”
When ordering lunch for jurors, Gaeta considers whether they might reach a verdict before the meal, Lowy said, because he does not want to waste a cent of taxpayer money.
In court, Lowy said Gaeta is usually a few steps ahead of him.
“Sometimes I was about to call him over to do something and he’s already done it,” Lowy said.
Gaeta said he knows Lowy so well that he anticipates what he wants.
“We get on so famously,” he said.
Gaeta said he is unsure what retirement will bring, but he has advice for other court officers.
“Know your surroundings,” he said. “Keeping the judge safe is the most important thing, especially when it’s my pal.” 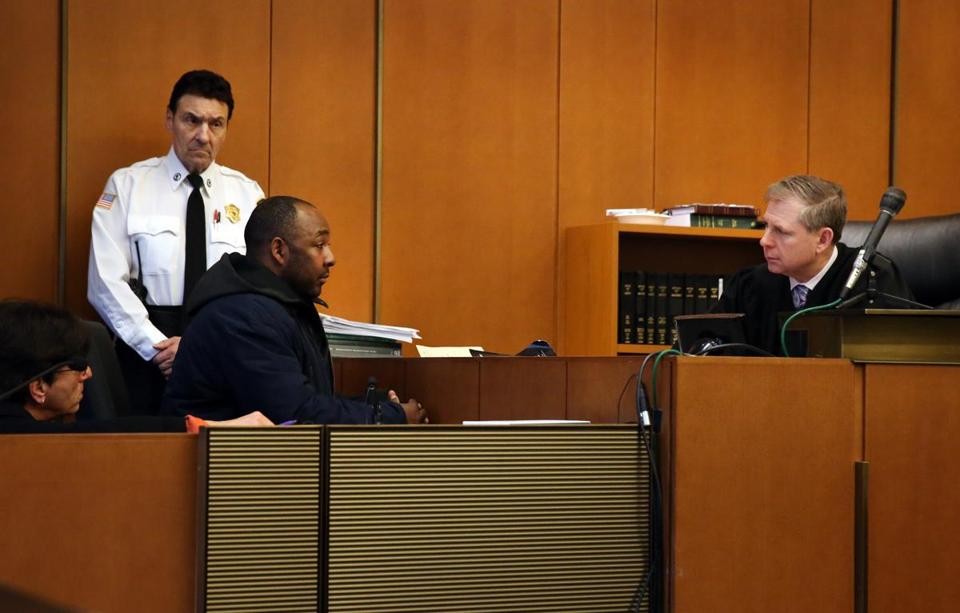 Reposted from The Boston Globe