Is It Time To Outlaw Workplace Bullying In Massachusetts?

Many have had a difficult colleague in the workplace, but sometimes things tip a little further into abuse. Advocates who say they’ve been victims of workplace bullying are trying to get legislation enacted that would give victims some legal recourse.

Visitors to the Massachusetts State House recently were greeted by a collection of black and white close-ups of faces, printed on posters about five feet high, staring with sadness and determination into the halls as legislators briskly walked by.

Neal Dias was one of the faces in that exhibit. He said it was important for him to participate. “For people in the State House, the politicians or you now, citizens of the state to come by and read some of the stories of some of the victims,” he said.

Dias says he was a victim of workplace bullying. He was a manager at Verizon, and says his coworkers turned on him when he started reporting what he saw as a culture of abusive treatment towards other employees.

“The first time I brought it to my boss’s attention that I was being harassed and bullied by he got up right there and told me he was going to beat the living [expletive] out of me," Dias said. "Right in front of my boss, right in front of the other managers. And I was being told I was only promoted because I’m a token, because I was black. My work was being sabotaged.”

Dias was fired, and filed a lawsuit against Verizon, which he lost. He couldn’t prove discrimination, and bullying isn’t illegal.

“Most severely bullied employees do not have a direct line of legal recourse for that type of abuse,” said David Yamada, a professor at Suffolk University Law School who studies the issue.

Yamada said current laws don’t protect employees from abuse if they can’t prove it was because of their race, sex, national origin, or some other protected class, or that it was in retaliation for whistle blowing.

“Those people go to lawyers asking for help and those employment lawyers say, ‘I’m sorry, this is bullying, it’s legal, there is nothing we can do about it.’”

Yamada said surveys have suggested a quarter of employees will face bullying in the workplace at some point in their career.

Yamada has written legislation to stop that kind of thing. It’s called the Healthy Workplace Bill, and it would allow victims to bring a civil claim against their employer and an individual bully. Yamada points out the bill would also give the employer the chance to avoid a penalty.

“If an employer can show that it took reasonable steps to prevent and respond to workplace bullying, then it may be able to escape liability,” he said.

That's not good enough for Christopher Geehern, who represents 4,500 employers in the state as Executive Vice President of Associated Industries of Massachusetts.

“I think this bill ultimately is a classic case of right objective, wrong pathway,” he said. “If an employee shows up for work chronically late and the supervisor has a discussion with that employee about that behavior, that employee could well construe that behavior as workplace bullying. But it’s really not workplace bullying, it’s just the normal course of supervision that companies go through.”

Geehern said even though companies could be let off the hook if they took appropriate action, they’d still have to go to court to show that. He says workplace bullying IS a real problem, but the way to deal with it is through more education and training, so it can be prevented and dealt with when it happens.

“Over 6 out of 10 employers will make the situation worse or side with the aggressor when workplace bullying is reported.”

And most of the time, he says, the target of the bullying just winds up having to leave the job.

A few states have passed some form of law addressing workplace bullying, but Yamada said if the current bill passes in Massachusetts, it would be the most comprehensive one in the country. This is the third time it’s been introduced in the state, and each time it’s gotten more support.  Although, it’s not on the Speaker’s agenda for a vote in the current session. 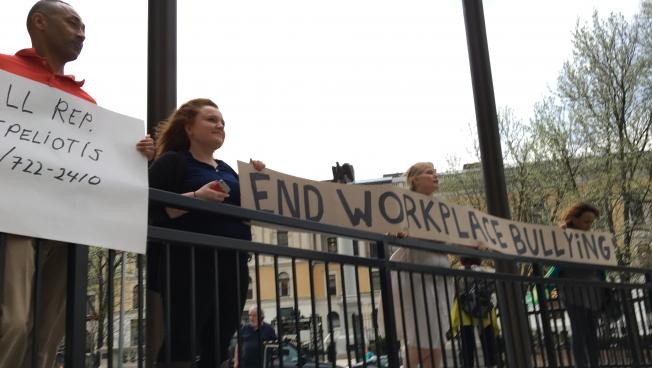