At 8:30PM every Wednesday night, the East Providence police officers join in the Goodnight Lights display, hoping to bring a little happiness to the patients of Hasbro Children's Hospital in Providence, RI.

For more on this, please read the article published in the Providence Journal below or view the origional here.

In a widening campaign to spread joy to hospitalized children, lights are flickering from buildings all across Providence for about three minutes at bedtime. Even the East Providence police park cruisers at an overlook across the Providence River and flash the emergency lights.


Every time he's slept over at Hasbro Children's Hospital while being treated for a brain tumor, little Blake Costa couldn't wait for 8:30 p.m. His parents, too.

At exactly that moment, the family has looked out the window at the darkened sky and been treated to a magical spectacle - lights intentionally winking on and off, even miles away, to say "good night" to all of the children at Hasbro.

In a widening campaign to spread joy to hospitalized children - not just during the holidays, but year round - lights are flickering from buildings all across Providence for about three minutes at bedtime. Perhaps the most dramatic "Goodnight Lights" display now takes place every Wednesday in the Costas' hometown where East Providence police park a handful of vehicles on a shoreline overlook. There, they let their powerful blue and red emergency lights shine across the water. Goodnight Lights: A magical spectacle for Hasbro patients After seeing the police lights, Blake, about 1 1/2 at the time, squealed, "Light!" even while recovering from brain surgery and chemotherapy.

Then, along with children in other rooms, Blake would turn a flashlight on and off to make a connection with the outside world - not through language, but lumens.

"Blake really loved it. Even the parents look forward to it," says his mother, Lisa Costa. "It's really amazing."

Goodnight Lights began as a little game Steve Brosnihan liked to play with kids at Hasbro. A cartoonist who volunteers at the hospital spreading good cheer, he realized that from many hospital windows he could see the India Point bus stop he bikes to after leaving the hospital. He'd tell the kids to look out for him and he'd blink his bike light on and off to say goodnight on his way home to Bristol.

Soon Brosnihan got the Hot Club, next to the bus stop, to flicker its neon sign and have patrons turn flashlights on and off. The Providence Steamboat Company joined in using lights on its tugboats. Lights atop the Brown University's sciences library wink too, along with lights on several of Providence's tallest skyscrapers.

About a half-dozen senior residents of Tockwotten on the Waterfront in East Providence gather with flashlights in a darkened room one night a week.

"It connects generations," says activities director Timothy Anderson. "It's a way residents can feel that they are contributing and making someone's life better."

Margaret Van Bree, president of Rhode Island Hospital and its Hasbro pediatric division, says, "Good Night Lights has been such a simple, yet powerful, rallying point for our community to come together and support the young patients. We're so grateful to the businesses, police departments and others who've made it such a success."

On a Wednesday evening in December, several minutes before 8:30, cruisers and unmarked cars pull into an East Bay Bike Path parking lot off Veterans Memorial Parkway. They park side by side in spaces temporarily reserved with police signs explaining Goodnight Lights.

Some officers are off-duty, including Capt. Michael David. His children and those of other officers show up, too. At exactly 8:30, the emergency lights of 11 vehicles come to life, creating a nearly blinding display. Lights at Hasbro respond in kind.

David said his officers immediately wanted to take part, but didn't fully appreciate its power until Blake's parents, Lisa and Nicholas, showed up at the overlook one night to explain how much the display meant to them.

"That was very emotional," said David, adding that soon after the officers welcomed Blake to their shift and made him an honorary officer.

Police in Orlando, Florida, learned about Goodnight Lights and put the program in place there.

"It's a very young project with incredible potential," Brosnihan says. For little ones, "it's like a magic trick. The older, more thoughtful kids have a realization that people are taking the time to do this every night. I find them moved in the direction of wanting to do something for others when they get out."

For parents, it's "a feeling of comfort and maybe a little hope this bad time will pass a little quicker. I've seen on multiple occasions adults go to tears. They tell me they can't not cry." 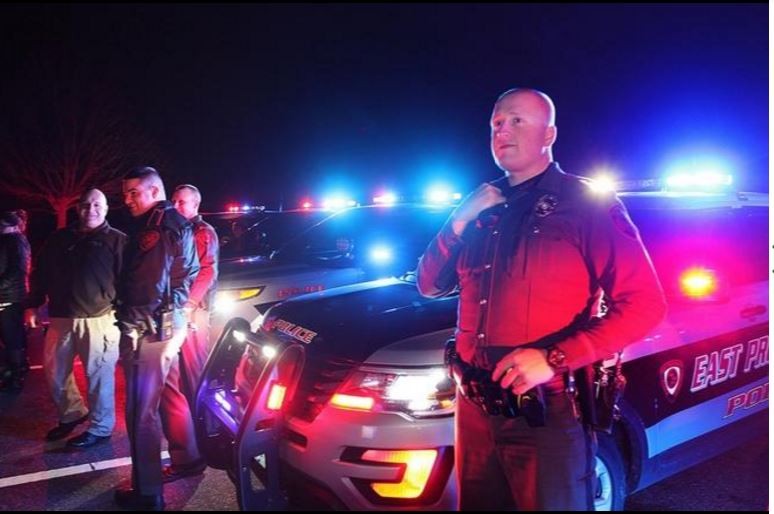