The holiday season is the season of giving and spreading the festivities. The members of our Fort Leonard Wood, MO local went above and beyond on a surprisingly warm winter day as they handed over 530 turkeys to their members, who then decided to donate the turkeys to members of the community.

Local R14-139 members donated the turkeys to other organizations in an attempt to make a difference for community members in need, including residents of a local shelter for abused women and many local families facing hard times.

The turkey giveaway wasn’t the first community-minded endeavor of the NAGE members at Fort Leonard Wood this year. Earlier in the year, Local R12-139 members joined a dozen different schools and gave $1,000 to each school, funding backpack programs to send underprivileged kids home with food for the weekend.

The generosity didn’t just lift the spirits of the people out in the community. Local R14-139 President Robert Richards said the effort made people aware of NAGE’s vision of a more just community and motivated more than 300 workes in the bargaining unit to sign up to learn more about joining NAGE. “It was a very positive and effective day for the union,” Richards said 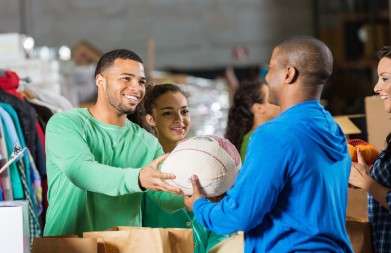