Story written by Jonathan Shugarts
Published in the Republican-American

WATERBURY — The head of the union representing the state's judicial marshals says he believes public safety is being jeopardized in the wake of layoffs that have reduced the ranks of marshals at state courthouses.

As a result of anticipated cutbacks in the state budget made by the legislature and Gov. Dannel P. Malloy, the state's judicial branch is closing three juvenile courts and the courthouse in Windham. Close to 300 employees were laid off as a result and the union claims 123 judicial marshals and security officers were among them.

According to the union, public safety at the state's 43 courthouses is now a concern, "with inexperienced, higher-paid, management-level staff placed in key front line security roles left vacant by layoffs."
Joe Gaetano, president of International Brotherhood of Police Officers Local 731, said many of the courthouses are "dangerously understaffed."

Citing the shootings of police in Dallas and the slayings of two bailiffs at a courthouse in Michigan by a loose prisoner, Gaetano said those events underscore a need for trained personnel.

Marshals, who are armed with pepper spray and batons, transport prisoners and secure them at the courthouses, in addition to dealing with the public. As a result of the layoffs, higher-ranking managers have taken their place, which includes probation officers manning metal detectors and chiefs escorting prisoners, according to Gaetano.

"The marshals understand the state's finances require belt-tightening, but the judicial branch seems more concerned with preserving management-level jobs, at the expense of public safety," Gaetano said. "To date, all of the layoffs have come from the ranks of front line staff, and none from management."

The response time for marshals in the courthouses has been cut as a result of the layoffs, he said. That means less personnel to deal with potentially volatile situations that can take place in the courthouse corridors, such as encounters stemming from divorces or criminal cases.

In Waterbury, several brawls have broken out in past years, including one in which multiple people fought inside a corridor. In those cases, marshals can call local police for backup.

"The marshals are doing the jobs of two or three marshals to get the job done," Gaetano said. "It's very stressful in every courthouse."

In some cases, marshals have been reassigned and are driving hours each day for their commutes. The morale among the marshals is also low, he said.

A judicial branch spokeswoman declined to comment on Gaetano's statements. 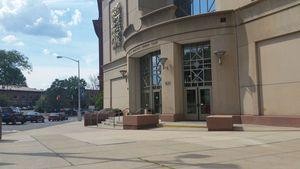